The second BSGE Pecha Kucha session took place at the ASM in Edinburgh. Pecha Kucha is the Japanese term for ‘chit-chat’, it’s a short, snappy presentation format in which speakers present 20 slides, one every 20 seconds to create a concise and exciting presentation. 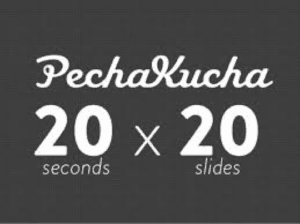 The ‘Rage against the machine’ themed session was presented by BSGE trainee representatives Donna Ghosh and James McLaren. The competition was open to any medical student or junior doctor. Five presenters, from all over the country, pitched their ideas to a lively and engaged audience. Presentations included ‘Minimally invasive surgery, past, present and future, never good enough? ‘Numb thumb-time to overcome?’, ‘Shooting the simulator’ and ‘The balancing act.’ The audience voted a team of medical students from St George’s University Hospital as overall prize-winners. Their presentation on ‘Surgical excision of endometriosis-is it time to rethink our approach to tackling this disease?’ was both fascinating and thought-provoking. 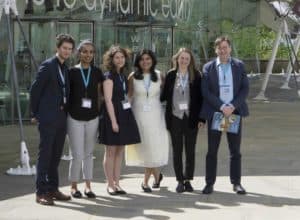 ‘Endometriosis is an enigmatic disease. Current treatments aren’t working; we need to look at it at an immunological level and change our approach and target inflammation. The team presented a great argument. They are really enthusiastic, as doctors we can sometimes lose that youthful passion, they have gone out of their way to go that extra mile. It’s amazing what they have achieved and I am very proud of them.’

They won two gold awards at the meeting, as well as the Pecha Kucha they were also recognised as best E-Poster for Non -Puerperal Uterine Inversion. One of the presenters, Melissa Haddleton, said that they ‘were slightly nervous initially, but about thirty seconds in we really started to enjoy it’ Noah Strang agreed ‘It was intimidating, there were no other medical students, the only other people we met before the session were two professors!’ Their assured presentation, belied their relative inexperience- the students still haven’t started their gynaecology placements. With this flying start, their future looks exciting and we anticipate hearing more in BSGE ASMs for years to come.

Although all the presentations had their merits, I was also particularly impressed by medical student Alex Robbins, currently in his fifth year at UCL, who asked “What’s a steady hand worth?” His well-prepared talk belied his relative inexperience, as he argued that appointments for surgical trainees should include aptitude testing. Alex also held his own under some stiff questioning from the audience and was rewarded with many raised hands during the vote, bringing him in a very close second.

It was a great start to a new addition to the ASM. I’m sure the Pecha Kucha session will become a favourite fixture in future meetings. You’ve got 11 months to think about your talk for Edinburgh 2018!