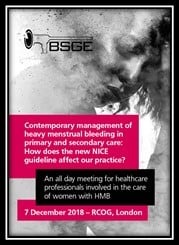 The BSGE is holding an all-day meeting on the contemporary management of heavy menstrual bleeding. It is designed for all healthcare professionals involved in the care of women with HMB, both in primary and secondary care.

This year, NICE have updated their guideline on the management of heavy menstrual bleeding. The meeting, which will be held at RCOG on Friday, 7th December, will explore how the new guideline will affect practice in both primary and secondary care.

HMB is a significant problem, It’s one of the most common symptoms affecting women and requiring investigation and treatment. The NICE guideline was first produced in 2007, however it has recently been substantially revised, in line with innovations and the accumulated evidence. The updated NICE guideline was published in February 2018; some of the new recommendations have been considered controversial and will have an impact on clinical practice.

The BSGE has put together this meeting to cover the contemporary management of HMB and its implementation within the context of the new NICE guideline. There will be a range of speakers, some of whom contributed to the guideline, some who criticised it and others who have provided major contributions to the scientific literature on heavy menstrual bleeding.

The meeting could benefit general practitioners, gynaecology consultants, trainees and community gynaecologists. Anyone interested in attending can view the provisional programme here., and register by clicking here.